Can magnetic storms cause earthquakes too? 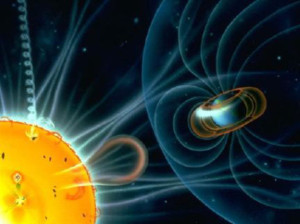 We have been preaching about the dangers of large solar storms and related coronal mass ejections and their effects on our power grid, telecommunications satellites, on astronauts in the International Space Station and even the health of people on Earth.  But did you know that solar storms may actually lead to earthquakes?

According to Namig Jalilov of the Astrophysical Observatory, the last solar generated magnetic storm, from the flare we reported on three days ago,. did not cause any technical failures, but it did affect people with high blood pressure and related diseases.   The relation to solar flares & CMEs to human health is widely known.

But solar flares spawned from our Sun’s current Solar Maximum period my lead also to earthquakes?  So says Mr Jalilov (Reported on en.apa.az) ,

Ironically, the same news organization published later today another article stating that the earthquake on 2/10 near Baku, posited to be related to solar flares, is baseless.

The bottom line is that scientists just do not know!  But there are suspicions that magnetic field disruptions due to excessive CMEs may be affecting the Earth in unique, but deleterious ways.

We will provide you updates as we learn more on this issue.  Thank you!

You can follow any responses to this entry through the RSS 2.0 You can leave a response, or trackback.