On last night’s Judge Jeanine program on Fox News Channel, Judge Jeanine Pirro discussed the potential crisis “a million times worse than what happened on 911.”  That is the US Power Grid going down due to a solar flare similar to the one that occurred in 1859.

Finally, some mainstream warnings about this potential problem. 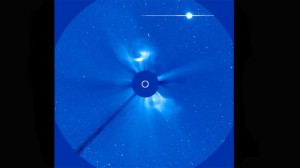 The white rings from the center are the CMEs.  The spot in the upper corner is Venus.

Recent study of flux ropes within a CME with hopes of developing early warning systems.