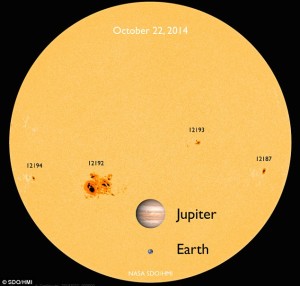 It may be true that British tabloids are more prone to titillation than to solid reporting. Yet, the Daily Mail’s piece today requires some real scrutiny and should cause concern for all who flip on a light switch each day.

Ellie Zolfagharifard’s article, “Giant sunspot aligns with Earth – and it could create huge flares that would wreak havoc on our power grids and satellites” is posted here.

Aside from the glaring error in confusing “flares” with CMEs (flares don’t damage power grids, whereas CMEs do), there are some worthy facts to ponder. Here is a list of them:

> It is likely to create CMEs.

> “The largest ever solar super-storm on record occurred in 1859 (Carrington Event)”.

> It released “the equivalent to 10 billion Hiroshima bombs” in energy.

And then there is this one…

> Nasa scientists have predicted that the Earth is in the path of a Carrington-level event every 150 years on average. This means that we are currently five years overdue – the likelihood of one occurring in the next decade is as high as 12 per cent.

Will AR 12192 create another Carrington-sized super-storm? No one really knows. However, it is one more in the now long line of warnings being highlighted by main stream media about the potential of a solar apocalypse. When we are warned over and over again by multiple sources of a pending calamity, and we do nothing to protect ourselves, what does that say about us?

Please let this be our clarion call. The science is solid and cannot be ignored. We must protect our American power grid and we must personally prepare our homes for the worst case scenario.